Sister Lorraine Gave My Turkey a B minus 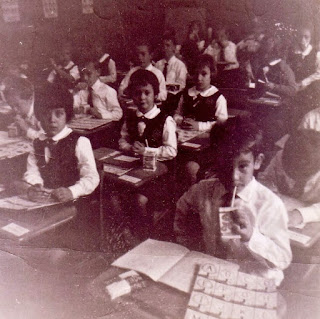 It was Wednesday afternoon, the day before Thanksgiving 1961 inside St. Stephen of Hungary’s second grade in Yorkville.
“Children, the Pilgrims had a bountiful crop their first year in the American colony. They arranged a peace treaty with the Indians. They celebrated together, and feasted on geese, deer, corn, and oysters.”

“Yuck,” said a few kids at the mention of oysters.

Sister Lorraine threw a look around the room then said, “… and President Lincoln made Thanksgiving an official holiday in 1863.” 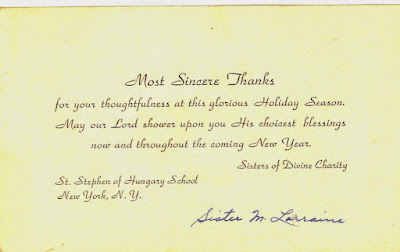 She cleared her throat, “Let’s move on. Everyone take out the hats, bonnets and headdresses we’ve been working on. Pilgrims, go over to the windows… Indians, stay on the closet side. Think about your lines, everybody.”

While the kids got into place, I put on my Indian headdress and snuck over to the teacher’s desk. It was the only one with a cartridge pen. Second graders worked in pencil. Sister Lorraine, distracted by the two herds moving to her left and right, missed my pre-show make-up application. I had no mirror to work with so I figured out two spots and wiped an inky finger across each cheek twice. Sister Lorraine gave us a short history lesson while she passed back our art assignments. My turkey got a B minus. I ran out of brown crayon and finished his stomach off with green and red. Eventually she saw me upfront.

“Thomas, what are you doing?” 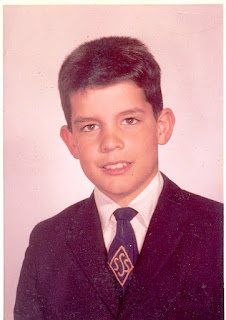 “Huh?”
“What are you doing?” Sister Lorraine repeated.
“Putting on stripes.” I said, standing in front of her desk working the ink off my fingers onto a piece of loose leaf.
“Why, God Almighty are you putting on stripes?”
“I’m an Indian. If I’m an Indian, I’ll need war paint. It’ll look good, promise.”
“Do you ever listen to me?”
“Yes, Sister.”
“Didn’t I just say the Pilgrims and Natives declared a peace treaty?”
“Was she nuts?” I thought.
“You’d trust an Injun? I watch a lot of movies. Believe me; Sister, peace treaties are broken all the time.”
“This will be a calm re-enactment of a peaceful gathering. Thomas, the war paint is not necessary.”
“There might be trouble.” I said.
“You have one minute, mister. One minute, that’s it. Go to the bathroom and wash the ink off your hands and face. And don’t touch your shirt again. Your mother is going to kill you.”


I learned a valuable lesson that day. Cartridge pen ink doesn’t wash off well with cheap school soap. The nun sent two boys to get me. My head was buried in the sink. 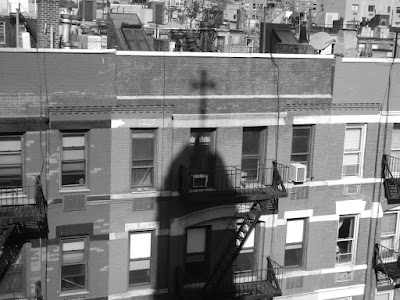 “Sister told us, ‘Get him back in here if you have to drag him by his feet,’” Joey Skrapits said to the back of my head. “She’s not happy. What’s up?” Leslie Henits added. I turned around and showed them. I held my hands out. They were beginning to look white; my face, however, had an even blue tan. It seemed the washing, rather than taking the ink off, just moved it around.

“I can’t get it off,” I said.
“Holy crap, forget your face, look at your shirt. Joey said. It’s a gunshot wound.”
I looked down and moaned.
“You’re going to need Lava Soap to get that off. Come on, dry up and let’s go.” Leslie said.

As I crept through the classroom door, the entire class laughed their heads off. I tried to bury myself in the middle of the Indian tribe. I thought of opening one of the coat closets and spending a little time in there. My first stage appearance as Injun Joe was ruined. The only good part was: Sister Lorraine was laughing too. I was more afraid about her being angry than me being embarrassed. Once I saw her laughing, I calmed down. I almost forgot that my mother was going to murder me.

We did our little Pilgrim and Indian “everyone be thankful” speeches, and then we started singing, “Over the river and through the woods, to grandmother’s house we go…” I stared at the clock over the alphabet cards lining the top of the blackboard. The clock said, One minute to three.

When I got home, Mom pounced. “What the hell did you do?”
“Nothing.”
“What happened to your shirt?”

Then she saw my face and her voice went up an octave.

“What the hell did you do to your face!”
“Two sixth graders started a fight in the schoolyard at lunchtime. I was leaning against a car right next to them. One of them had a box of pen cartridges in his shirt pocket. They were wrestling, two of the cartridges were crushed - and the ink flew all over. Luckily, I wasn’t hurt, but the ink got me in a few places.”
“A few places?” Mom said.
“Are you sure you weren’t refereeing the fight?
“No, Mom…no, no, no, I was doing nothing. Just standing there.”
“Where? In the ink factory when it exploded?”
“Take the shirt off and throw it away. Then come over here by the sink.”
Mom knew second graders weren’t allowed near ink.
“Thank you, God,” I whispered.

At the sink, Mom put Boraxo scrubbing powder on a washcloth and began making little circles on my face.

“Ouch” I said pulling away. “My face is being ground with sand.”
“Well, what else can we use to get this ink off? Stop fidgeting and stay still. If you let me work, it’ll be over one, two, three.”
“Big fat liar,” I thought.

Once clean, my face was a deeply embarrassed rosy red.

I gave him a knuckle when Mom wasn’t looking – a slight tap. He had a fever, so I held back a bit. I felt bad for him. On the verge of getting sick, there was no way Mom was letting him go with Dad and me to the Macy’s Thanksgiving parade in the morning.
Part two of three tomorrow… 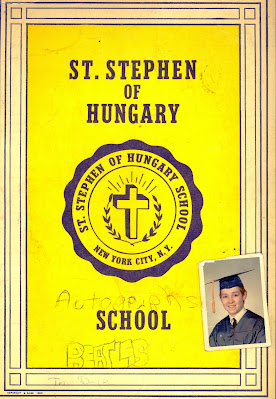 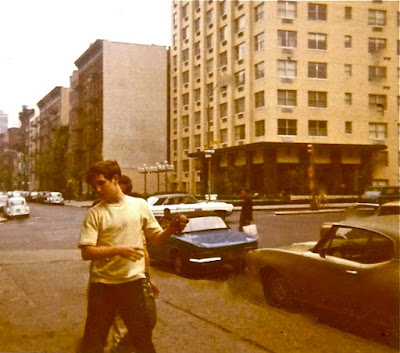 Your stories are like a time machine! Such wonderful memories of St. Stephen's and the old neighborhood. Please write more and thank you for these little treasures. Happy Thanksgiving!