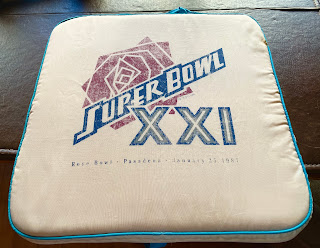 “Tommy, want some action?” Al said to me on the school bus.

Now he had my attention. The Giants would keep the score low through ball possession.

would be 39 points or lower.

headed for the Rose Bowl to see the New York Giants play the Denver Broncos. The trip

started two weeks before. The day after the Giants won the NFC Championship game I

called airlines for a round trip to Los Angeles. They were sold out. Instead I bought a

reservation to San Diego. Over the next ten days, I tried to locate a game ticket and had

no success. On the Thursday afternoon before the event I began calling travel agencies to

try to sell my flight back to them. The first place asked me why I was selling. I told her I

couldn’t get a game ticket.

An hour later, the messenger arrived and I examined my ticket.

Possibly the worst seat in the 101,000 capacity Rose Bowl, but I was going to see the

Pasadena. The problem was traveling from San Diego to a hotel lobby in Irvine where

Jane and I had worked out a pick up. When I landed, I started working the rental car

counters. A guy my age said he was driving to San Francisco. I told him if he dropped me

off at my hotel on the way north, I’d pay his first day rental. When we got near the hotel

he pulled the car over to the shoulder and said he was late. He took my money and left

me on the side of the road. I climbed down the embankment and over a fence into the

hotel’s parking lot. Jane was in the lobby when I ran in. It was 3 a m. The game of my

life was only 36 hours away.

Jane found companies running buses to the Rose Bowl. I bought my ride for $15. At noon

on Sunday, I was on a yellow school bus, with one other Giant fan and 40 Denver Bronco

fans. I was excited and surrounded by the enemy. I waved goodbye to Al and Jane. They

looked like proud parents, except for the fact that Al was counting on me giving him

money to pay his bookie if I lost the bet.

Gliding over the California roads the bus was a happy land where Bronco fans, the other

Giant fan and I joked together. The New York guy shared his blue tortilla chips with me,

and kept asking, “Would you like another Giant chip?”

Off the bus, I strolled around the Rose Bowl a few times to kill time and I ran into Andy

Rooney in his lucky Giant raincoat. We talked about our love for the Giants and old
Yankee Stadium. 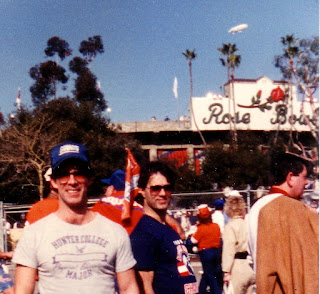 Stepping through the dark tunnel into the Rose Bowl my heart smacked inside my chest.

My long suffering was over. The New York Giants were my father’s and my unbreakable

link. Our passion for football was unconditional. When I was 7 to 9 years old the Giants

lost three consecutive NFL Championship games. Turning 10 in 1964 I knew that would

be our year, the Giants, Dad and me. But they stunk, and kept on stinking.

By half time, I sensed victory even though the Giants were losing. In the third quarter the

me going, watching, listening to hundreds of Giant games together I started to well up,

but then I remembered my bet. My stupid $100 bet. Every time I had a good thought

about what was happening on the field I also thought 4 more points I lose my bet.

As I’m having these feelings, the Giants are driving towards my end of the field. On a

trick play a receiver ends up wide open. Phil Simms throws the ball to him and I’m

mumbling, “Drop it! Drop it!” The receiver catches the ball and my heart lifts then drops

at the same time. How could I ever root against the Giants? Best day of my life and I
tarnish it.

Final score was 39-20. I couldn’t wait to talk to my father. Back on the bus: silence and

40 broken Bronco fans, me and the guy with the blue chips. The Rose Bowl had only had

two exits and all the VIP’s left first. We idled in the parking lot for an hour. I felt like I

was in a funeral home on wheels. I could hear sad heaving coming from the grim Bronco

fans. A tall woman had a tear rolling down his cheek. I felt bad for them but remembered

how many times I had sat in their seat. Once in a while, the Giant fan and I would look at

each other across the aisle and exchange a quick hand raise, a small yip and one word “Giants!”

Several hours after the game we arrived back at the hotel. I called Jane and asked her to

delay one hour so I could celebrate at the hotel’s bar. I put money down and a sea of blue

started forming around me. I remembered something important and slipped away to 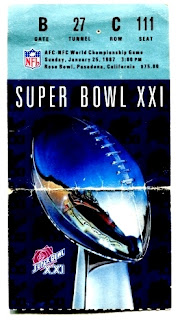