Time to Be All There... In the Moment 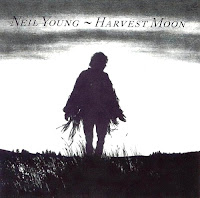 The best part of leaving my job in February is anxiety-free time. I'm listening to Neil Young's "War of Man" on the "Harvest Moon" record and it's beautiful. I never took the time to get into it, and I will definitely see "The Drawings of Bronzino, 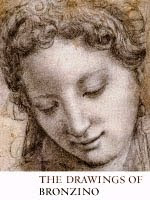 " at the Met, instead of just ripping out the page from Time Out to remind myself, then missing the show because my balls in the air exceed my juggling ability.
.
Going forward, my mind is going to be right where I want it to be... most of the time.
. 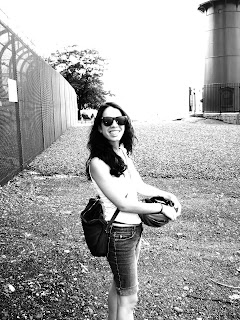 Rita Hayworth Drove Through My Dream 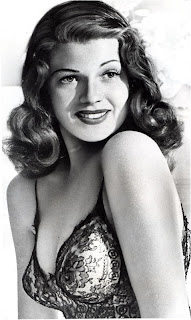 In my dream, Rita Hayworth sat in a night club listening to Frank Sinatra taunt and tease her in Pal Joey. My five senses woke, reporting for duty.

How You Gonna Keep Them Down on the Farm After They've Seen Paree? 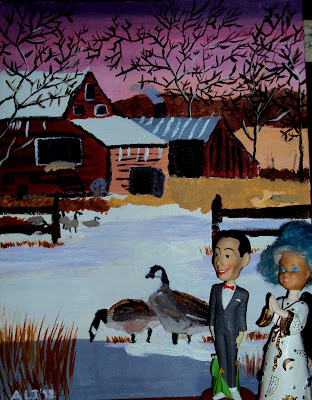 Clearly spending too much time indoors today, I organized a trip for Pee Wee & Elsa Lancaster Barbie to visit Alison's farm with geese in winter. Ali painted the farm when she was ten, making her grandfather, Bob, very happy. 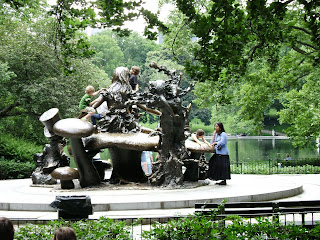 I strolled Yorkville with Dad all the time. Whenever I could I tried to direct our walk past Rappaport's Toy Bazaar on the east side of Third Avenue between 78th & 79th Streets. They had gorgeous model sailboats in the display window perfect for cruising Central Park's sailboat lake south of the Alice in Wonderland statute. I pictured myself in my captain's cap directing my "Flying Dutchman" over the sea just off Fifth Avenue. 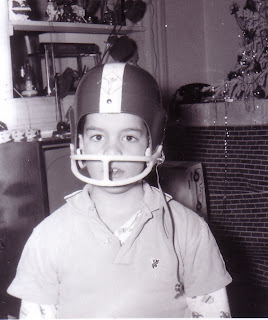 One day when I was eight, I got Dad to turn left on 79th Street putting us directly in front of Rappaport's. It was a warm Saturday, the street was crowded with people. Dad grabbed my hand and we did a punt return dance through and around most of the folks. I wanted to stop and pitch Dad on the boats, he wanted to get to 72nd Street to meet a friend. As he pulled me forward and I pulled him back a tall man said, "Hi, Tommy." I said, "Hi, John." Dad gave me a funny look and we kept going. Crossing 78th Street a short chubby man with a moustache said, "Hey, Tommy." I said, " Hi, Jeff."


Once we were on the sidewalk, Dad stopped dead and twisted my head up with his hand so we made eye contact. "Who the hell were those two men?" "Oh, they're Emergency Room doctors at Lenox Hill." Dad shook his head and we kept walking.
.
Later that night 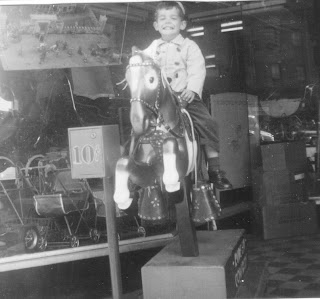 , Dad said to Mom, "I think Tommy should wear his new football helmet all the time." My mother's face said she was given the idea strong consideration. I had no defense. My stitch collection was starting to make my face look like a hockey goaltender. A clumsy fellow, I regularly fell off the ten cent rides in front of Woolworth's, Lamston's & Grant's.
at January 23, 2010 6 comments: 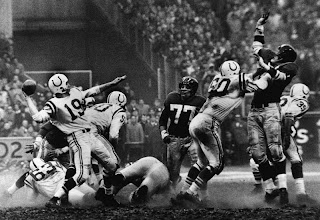 Nineteen days of work to go got me thinking about Johnny Unitas. Thank God, I was only 5 years old when Unitas broke my father's heart by beating the Giants in the 1959 NFL Championship.

Nineteen also got me thinking about Fritz Peterson, a durable New York Yankee pitcher who wore 19 and 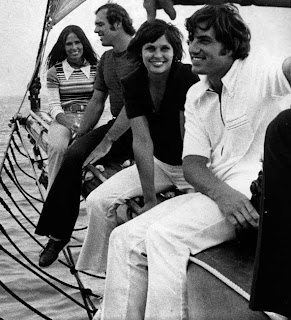 was involved in the most unusual sports trade of all time. Peterson and his Yankee teammate Mike Kekich traded families. They did a wife swap and threw the kids in to complete the deal. You can look it up ~ 1973.
.
This trade dominated neighborhood stoop banter that entire year into the next winter. It was a perfect male teenage merge of baseball statistics and sex. The possibilities were boundless. We yapped about it so much I remember Peterson's wife, Marilyn's nickname was "Chip" and that her favorite ballplayer was Al Kaline. I lost sleep over Susanne Kekich.
.
at January 21, 2010 No comments: 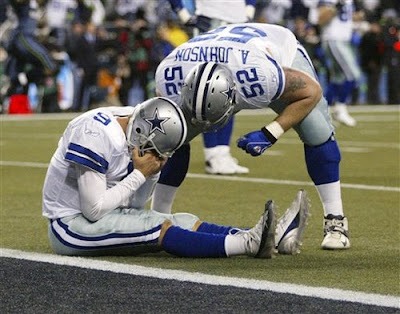 Time for another fancy five dollar raised Jesus on the front Wake Card with the name of the dearly departed:
Dallas Cowboys 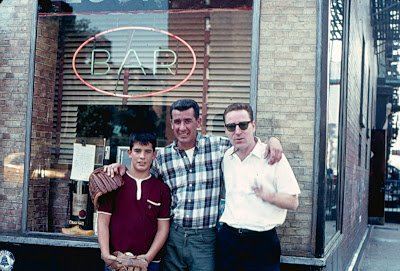 Men & boys love taking photographs in front of taverns. The top one is me, Dad, our baseball gloves and a friend named Red in front of Loftus Tavern at the s/w corner of York Avenue & 85th Street in 1966.
Loftus was our favorite catch location.
.
The second photo is Dad and his crew in 1943 a block away on the n/e corner of York & 84th Street in front of Gene's Tavern.
The next four photos are the some of the same guys in front and on the side of Gene's.
All these pictures are courtesy of Walter Trusits, Dad's best friend. Walt dropped over this afternoon to do some scanning. 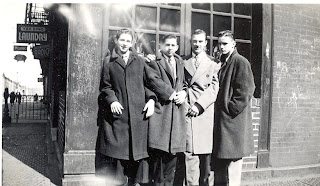 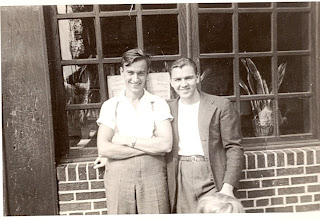 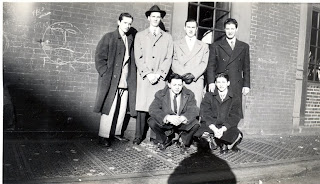 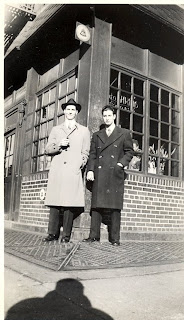 Winter Sun Lights Up the Park 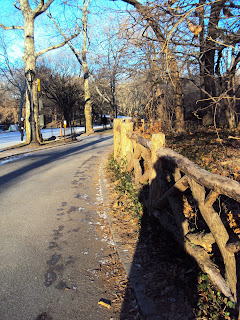 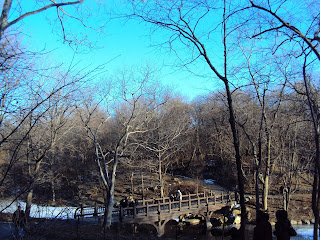 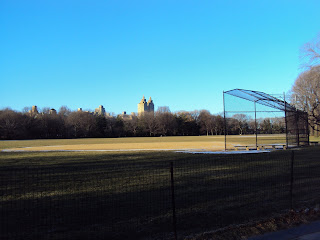 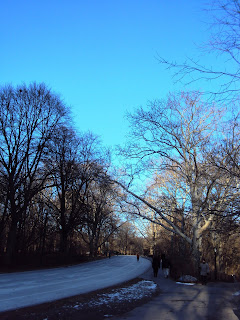 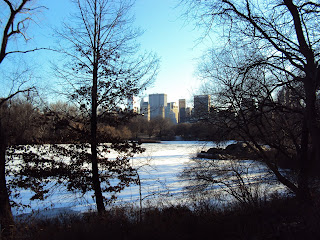 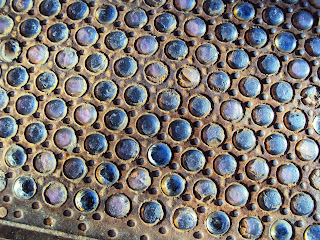 Started off the new year with a bike ride south on the Hudson River seawall. The sun played peek a boo all the way. 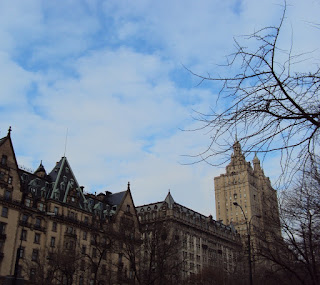 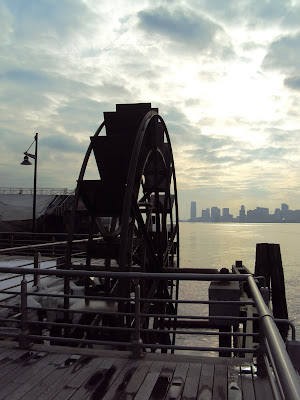 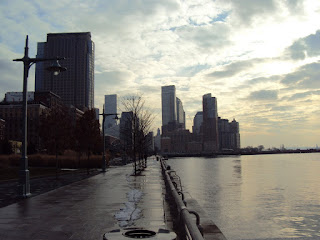 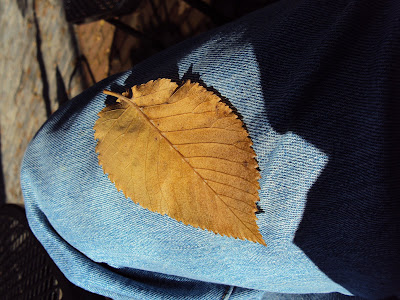 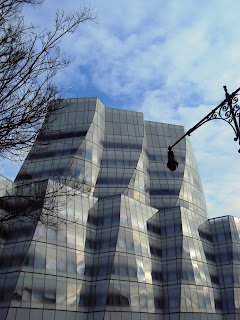