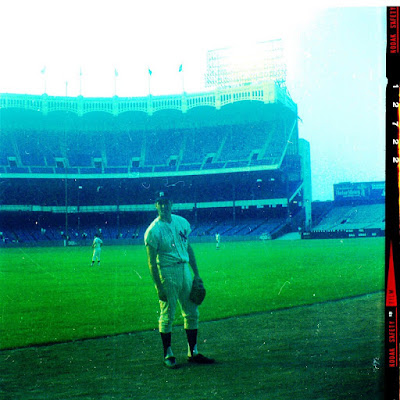 "I need a rock to throw at your head. Shut up, I'm trying to listen to the Yankee game." I said to Joe Menesick and Jamie Peters, while holding the transistor to my ear, desperately moving the radio around to pick up Phil Rizzuto's voice on an AM station far away in the Bronx.
& Artie Betz @Pouch camp 68
We were in Ten Mile River Scout Camp in Narrowsburg, New York. Troop 654, from Yorkville, Manhattan. After one week going on two weeks, we were all sick of the camp's steamed food. When we cooked, we screwed it up. We craved Hostess and Drakes Cakes. One kid said, "I Want a Funny Bone!" The cake with the peanut butter vomit in it. 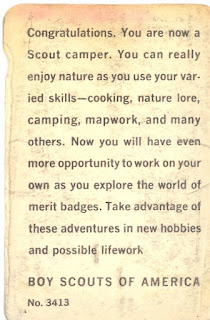 Someone threw something at him.
"Good." 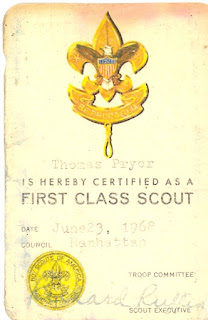 Remarkably, one of my childhood heroes, Rocky Colavito, the smooth slugger who resembled my Dad was pitching for the Yankees against the Tigers at the old Stadium. "The Rock," four home runs in one game was on the mound, it was August 25, 1968. Less than three months to The Beatles "White Album" release. In eleven months, we'd be on the moon, then Woodstock would rock, and the first Giant vs. Jet exhibition game would take place at the Yale Bowl. 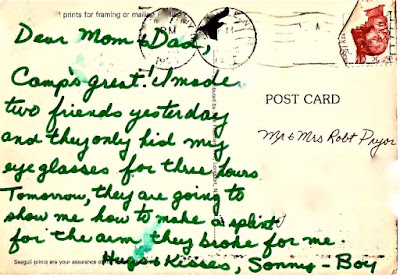 With my free hand, I scratched the countless mosquito bites on my legs and butt, then I heard, "Dobson lines a one bouncer to Horace "No Double Play" Clarke, Clarke handles the ball cleanly and fires a strike to Mickey Mantle on first. Heeeee's Out!" Naaaa, the radio voice was fuzzy but I did hear Clarke throw the ball to Mantle and that Colavito was out of the inning with no runs, leaving two men on base. 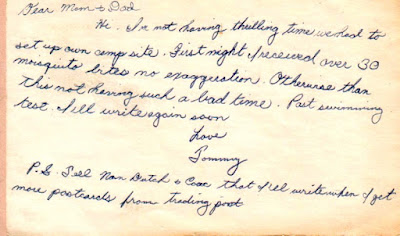 Yankees were down 5-1, going into the bottom of the sixth, Joe, Jamie and I were supposed to be policing the camp site and working on some kind of Scout merit badge. I had already achieved my badge limit of three, Cooking and Hiking and whatever it's called for using a map properly. I earned a significant goof off period and planned on taking these two guys to hell with me before they we went home. While thinking of the next thing to anger the scout leaders the Yanks scored five runs. Rocky Colavito was the winning pitcher.

Folllowing afternoon, Joe Menesick and I, doing nothing close to nothing, decided to paddle a two man canoe to the middle of the lake to ram a war canoe full of Brooklyn scouts broadside. We congratulated ourselves on our way back to shore by guessing our punishment. Joe's guess won. A formal invitation to the Camp's Scout Master quarters before breakfast the next morning.
If you enjoy my work, check out my memoir, "I Hate the Dallas Cowboys - tales of a scrappy New York boyhood." It's available at Logos Bookstore, 1575 York Avenue, or buy it online at Amazon, Barnes and Noble or other booksellers. The book has 135 five star reviews out of 135 total reviews on Amazon. If you do read it, please leave a few honest words about the book on Amazon and B&N.
Thank you! 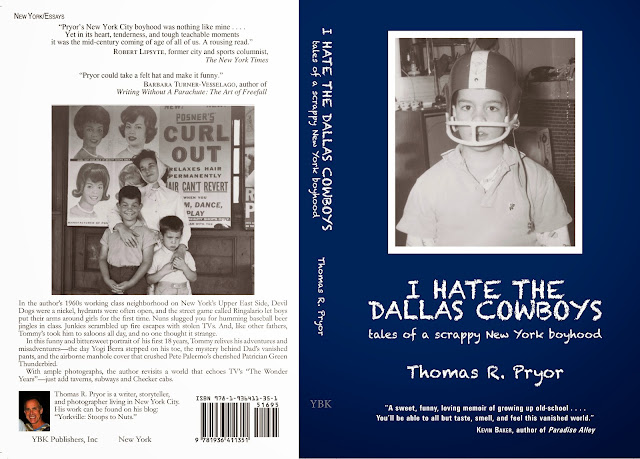 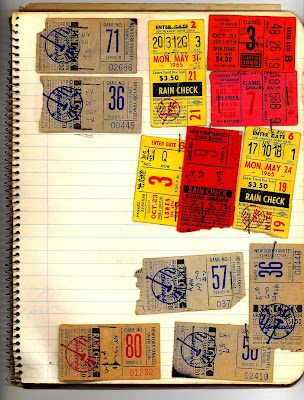 "Two Guys Talking on the Corner, " one of my favorite Dad stories from my 1960s' nyc memoir, "I Hate The Dallas Cowboys." It also appears in Mr. Beller's Neighborhood.
"Dad, I miss our games of catch." 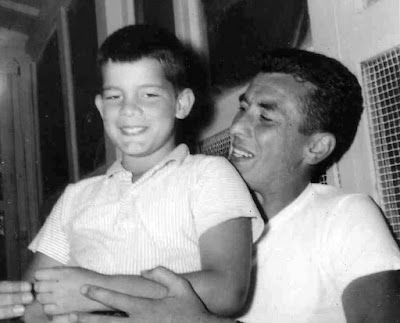 Dad and I did four things together: play sports, attend sports, watch TV, and go to the movies. I liked movies the best; it’s much harder telling a kid what to do in the dark. You would have loved taking me to the movies when I was 6 years old. I was a cheap date, one box of Pom Poms caramels and a dime soda kept me blissful through the whole film and I shut up. Didn’t want to miss anything.
It was the fall of 1960, which I remember for three reasons.
I had just started first grade, the Yankees had lost to the Pirates in the World Series, and Dad was rooting for Nixon against Kennedy to spite my Irish grandfather. I still believed my father was infallible. He never had to use this line on me — “Are you gonna believe what you see or what I tell you?” He accomplished his goals without direct engagement. Looking back, I suspect he periodically forgot I was his son and thought I was the most intelligent dog in the world. But this day would be different.
Dad’s charm was in full swing as he pulled me along up 86th Street. I kept my eye out for friends. The last thing I needed were the guys giving me the business, “Daddy still holds ya hand, Tommy the baby!” Resistance was futile, so I decided to keep tight to Dad’s side so it looked like we were just walking very close together.
“So, what do you want to see?” Dad stopped at the corner of Third Avenue, moved the cigarette out of his mouth and looked down at me. 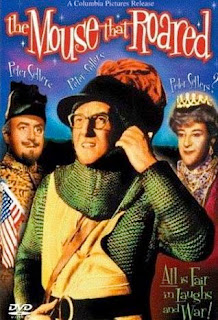 “The Mouse that Roared, a very funny comedy, or that other film up there, The Time Machine?”
Up ahead of us on the north side of 86th Street were two movie houses, the Loew’s Orpheum and the gigantic RKO. 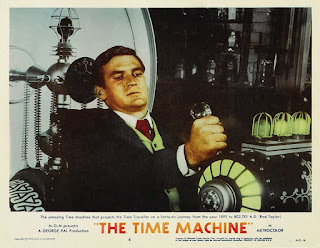 “What are they about?”
“Well… The Mouse That Roared is about a tiny little country that declares war on the United States. The star of the film, Peter Sellers, is a famous English comedian. You’ll love him.”
I just stared at Dad hoping he’d move on. I didn’t like war. Finally he said, “The Time Machine is a science fiction movie I don’t know much about.”
“What do you know?”
“It’s about time travel.”
“I want to see The Time Machine.”
Dad stared down at me, holding the look, hoping I’d keep talking. I didn’t. Getting this look made me nervous and I usually blabbed on just like Dad wanted so he could carefully talk me out of something. But this time we just stared at each other.
After a traffic-light-missing pause, Dad said, “What???”
“I love time travel.”
Dad rolled his eyes. He had no clue how crazy I 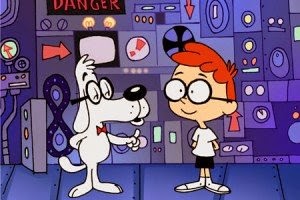 was for Mr. Peabody and Sherman on The Rocky & Bullwinkle Show, which I watched faithfully every Sunday. Mr. Peabody invented the WABAC Machine (pronounced “way back”), which allowed him and Sherman to time-travel to ancient Rome, the voyages of Columbus, the dinosaur era, you name it. I wasn’t sure what science fiction was, but I loved time travel.
Dad recovered. “Oh, I bet it’s going to be one of those talky films you hate.”
I said nothing.
Dad threw a wild punch, hoping it would land. “If we go to The Mouse That Roared I’ll take you to Prexy’s afterwards for a hamburger and a milk shake.” 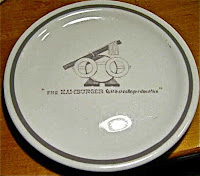 I ducked his shot. “Why can’t we go to Prexy’s anyway?” 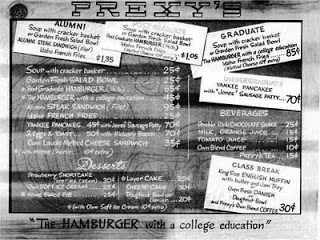 Dad’s shoulders rolled forward and his chest fell as he grabbed my hand. Swiftly, we crossed Third Avenue, sidestepping the spray from a street-cleaner truck, and headed to the RKO to see Rod Taylor, whoever he was, in The Time Machine. 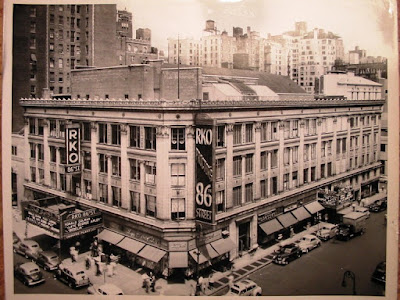 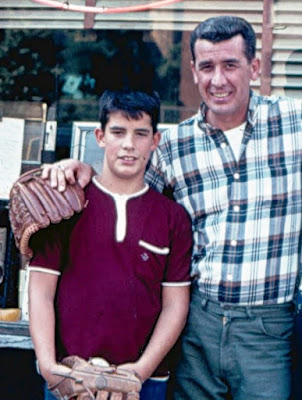 Sitting on the 500 East 86th Street stoop itching my ass next to Leda Pharmacy, I hopped off to greet my father coming home from work on the crosstown bus.

It was five forty-five on May 24, 1965. Late spring, warm enough in the evening, to sit in the stands wearing only a sweatshirt.
The previous Saturday night, Dad and I watched a Yankee game on our tenement roof using every extension cord in the house.
"You're both nuts," Mom said to Dad's ass as he climbed out our fourth floor window onto the fire escape with the cords. Once we settled in on the roof with kitchen chairs, a card table for the TV and a spaghetti pot full of ice, beer and ice tea, 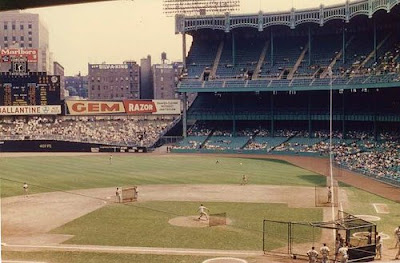 We got to get up to the Stadium for a game before they go on the road."

The game start was 8pm.

Dad called Mom, who was not thrilled, it was a school night, and he and I jumped into a Checker cab in front of the Mansion Diner and shot up the FDR. At the Stadium, Dad bought lower box reserved seats in section 17, half way between the Yankee dugout and the right field foul pole. I still have the stub. 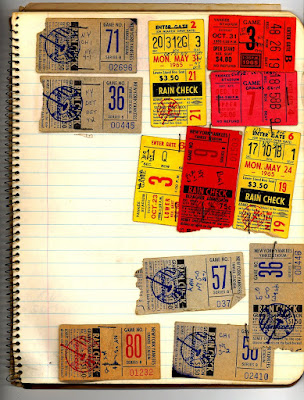 Dad wrote in the line-ups while I bounced my eyes around the mostly empty ballpark. I smelled cigars, peanuts, and freshly cut grass. This was when I liked the old Stadium best. Just the ballplayers on the field and us, real fans, in the stands. You practically had a whole section to yourself, if you didn't count the hundred kids assembled in right or left field waiting anxiously for imminent home runs, depending on whether the batter was left handed or right handed. The gaggle of kids would travel all away around the ballpark to the other side of the field to get in position for a lefty or righty during batting practice. Watching them run was like a Peanuts cartoon soccer game. Dad wasn't nuts about me being in that group yet,"when you're a little older," he wouldn't let me go by myself, and hated flying around with me, "Let's stay here, this way, if the ball comes this way, you'll have it all to yourself."

There was no sense arguing with the man, so I focused on the good. With so few people around us, I could hear the ballplayers yell at each other as they played pepper and threw it around the outfield. I got an idea who like each other, and who tortured each other.

The Indians were finishing their batting practice. Leon Wagner, a lefty, pounded three pitches into the right field stands. My heart dropped missing the action. I knew the home run derby was going to continue in left field. Rocky Colavito was coming around the cage to take his at bat.

I mumbled, "Why'd I bring my glove," and slumped in my chair.
Dad looked over at me."Tommy, I did the Indians. Why don't you do the Yankee lineup?" 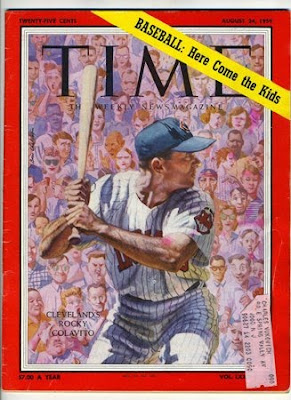 When I reached for the program, I heard solid bat contact, then Dad took my head and pulled it towards his chest hard.

I turned and saw a broken slat on the top of my chair. Colavito had sliced a foul that split my wooden seat. Dad and I stared at it forever, then I began looking for the piece of wood that broke off, a valuable souvenir, Dad grabbed me, picked up our things and we headed out to the right field box seats.

All future batting practices were viewed in the bleachers, outfield or behind the plate. Colavito already a secret Non-Yankee hero of mine ~ he hit four homers in a game in 1959 and looked like my Dad ~ became my favorite all time non-Yankee player. 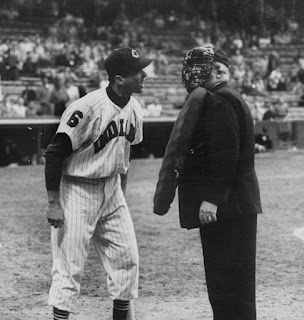