There Goes The Sun 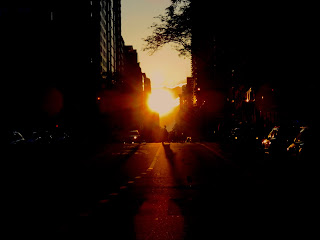 Last night at 79 Street.  Low clouds on horizon hid the sun as it went down. 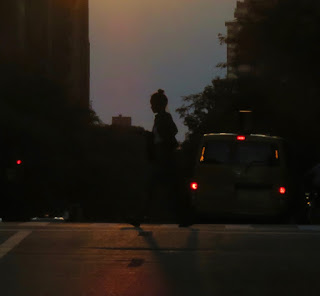 Photos on or near the Equinox from the last few years. 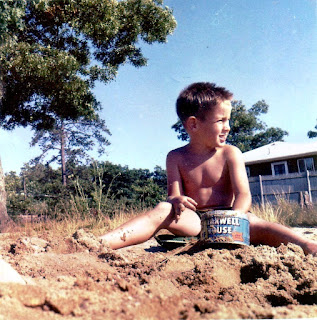 Today is Rory's birthday, I miss him. Here's the odd story about our parents unhealthy discussions naming their sons. Happy birthday, Brother. We played our roles the best we could in Mom & Dad's 46 year long opera.

The apartment in Woodside overlooked the No. 7 El and the Long Island Rail Road. The two train lines crisscrossed, and one train rattled over another train all day long. It was March 1954, a year after Mom’s ketchup-smeared death on the kitchen floor.

“I need food!” Patty pleaded, rubbing her big belly in the kitchen.

“There’s plenty of food,” Bob answered, playing with the bunny ears on top of the living room TV.

“YOU’RE A LIAR!” Patty opened the refrigerator and eyed the contents for the fifth time in five minutes.

“There’s no food-food, only junk. I want bread, I want bacon, I want Hellman’s mayonnaise!”

Disregarding her request, Bob shook ice into the spaghetti pot that was chilling his six bottles of Rheingold. Wiping his hands on a dish towel, he definitely heard Patty’s next statement: “Get off your bony ass and get me food!”

Bob ignored this, too. It was “Friday Night at the Fights” and he’d just settled in – first round, first beer. Desiring perfect comfort, Bob moved a hassock over to put his feet up. While doing this, he missed the left hook that sent one of the boxers to the canvas with a thud. Unfortunately, Bob’s man was down. So was Bob, $20. After the stiff was counted out, the telecast went to a commercial. Disappointed, but now available for chores, Bob wrapped his arm around his extremely pregnant wife’s head.

She pushed him away. “Get off. You know I hate anyone touching my head.”

Bob bent over, kissed Patty’s cheek and asked her softly, “What do you need, Hon?”

Patty reeled off five items, and aimed her lips up to kiss Bob on the mouth.

Back from the store, Bob put his beers in the fridge, washed the pot and put water on for spaghetti. Grabbing a black frying pan, he made two bacon sandwiches with extra mayo on Silvercup bread. After serving Patty both sandwiches, he took a beer and joined her at the kitchen table.

“So, we’re decided on baby names, right?” Bob said. “Marc Anthony if he’s a boy, and Alison Leigh if she’s a girl.”

Bob smiled. Patty did not.

“You’re so full of shit. The girl’s name is fine. When you name the boy Marc Anthony, be sure you walk carefully over my dead body. Because that’s the only way that stupid guinea name will ever appear on my son’s birth certificate.”

“Oh, cut the crap and get that stupid puss off your face.”

“So what name do you want?”

“Red? Our hair is black. It’s a girly name – you’re guaranteeing he’ll get the shit kicked out of him.”

It grew quiet. The only sound in the room was Patty’s low hum. She loved bacon.

Bob said, “Give me an alternative.”

“Nope,” Patty said in between bites.

“That’s inspired.” Patty pointed her sandwich at Bob. “I thought we agreed, no fathers’ names?”

“You mean we’re going to name him after Stone Face?”

“That’s my compromise. You’ll get to name the next baby.”

Patty swallowed a large bite of mayo, with a little bit of bacon and bread attached to it. She chewed slowly, wiped her mouth, and said, “OK.”

On March 20th, Patty gave birth to an eight-pound boy. When the nurse let Bob into the recovery room and he saw Patty cradling the baby, he started to cry.

“Oh stop your blubbering and give me a kiss.”

“Not too swift,” Patty said, wiping sweat from her brow.

Bob picked up the wrinkled, red-faced boy. He thought the baby’s head looked like a grapefruit. A gorgeous grapefruit. Bob held the baby for a long time, then returned him to Patty.

“I have to fill out the birth certificate. I was thinking about Robert as a middle name,” Bob said.

“You picked the first name. I pick the middle name.”

That night, Bob temporarily parked his anger over Mom’s choice of middle name, and hailed a cab to his old Manhattan neighborhood. He celebrated his first son by dancing on the bar in Loftus Tavern on 85th Street and York Avenue. A month later, the boy was christened, Thomas Rory. When the priest repeated the boy’s second name, Bob rolled his eyes.

A year and a half later, Thanksgiving 1955, Bob and Patty told their families they were expecting again. Throughout the pregnancy, Patty kept Bob in the dark about names. He begged and whined for hints. Late in Patty’s term, Bob tried to bribe her by hiding candy bars around the apartment, promising to reveal locations only if she told him the name. Patty never cracked.

On June 20th, Patty gave birth to a perfect boy. Bob dropped Tommy off with Bob’s mother and went directly to the hospital. The room was dimly lit; the baby was sleeping in Patty’s arms. She gave Bob a weak wave. He went over to kiss mother and son. Patty gently held Bob’s arm, keeping him close. She tilted her head, signaling him to lean in so she could whisper something. Bob pressed his ear to Patty’s dry lips.

Bob backed away. “That’s nuts – we’ve already got a Rory.”

Bob knew he’d been had. In desperation, he blurted, “His middle name is Robert.”

Patty settled back into bed, gave Bob a sly smile and squeezed her Rory tight.