His Naked Nose Was Tortured by the Siren Sweetly Cooking 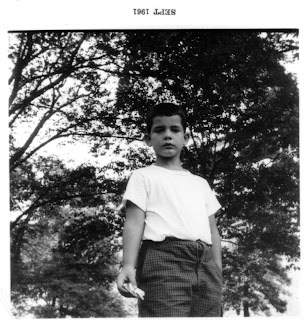 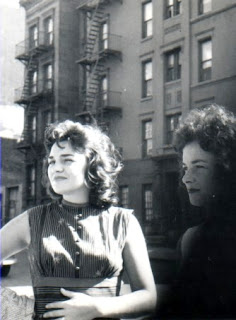 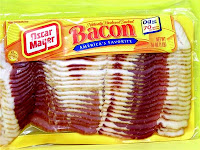 "Joannie, when I stayed over your house as a boy, after you made me breakfast you'd disappear from the room for a while. Where'd you go?"
.
"I never left the kitchen. After I gave you the bacon, I snuck behind you, leaned over your head, and listened to you hum while you chewed."
.
Joannie Baloney told me this right before she died at 56 in 1991. Joan was my Mom's middle sister, my godmother and the funniest person I've ever known. On the rare Friday night, Dad took Mom out, I'd stay over Joan's 5th floor apartment at 321 East 85th Street. Rory would stay with another relative because I had first dibs on Joan, and more importantly, there was a unilateral pact in our family ~ under no circumstance were Rory and I allowed to stay over together in any one relative's house. Everybody did it once, and once was enough to trigger this Pryor brothers babysitting boycott. If Mom tried dumping us both on one relative she'd get responses like this.
.
"Can't do it, the kids got the German measles and their scratching their asses off."
.
"Sorry, Patty, Eddie gashed his leg, and he's bleeding all over the place."
.
"Jesus Christ, gotta go."
.
Joan's husband, Georgie, worked for UPS and bowled on Friday nights downtown near his Canal Street route. So it was just Joannie & me, the couch, a cool radio and bongos that hung on the wall near the poster of the Spanish Matador, Pepsi Cola, Dipsy Doodles, Wise Potato Chips, Dip, TV with the the Avengers and Emma Peel, the Wild, Wild West, Twilight Zone, Hitchcock, then quiet, no fighting and uninterrupted sleep.
.
.
photos above:
.
Joannie and Barbara, my two Ryan aunts
me to the right, well dressed & eating a sandwich
one pound of Oscar Meyer Bacon... yummmmmmmmmm
at January 29, 2009 1 comment: 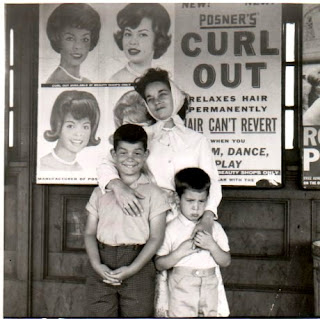 "OK, on a count of three, when he hits the button make a silly face," Mom said, as we stood on the Pelham El's train platform on our way to Freedomland in the Bronx.

After Dad took the picture, he gave the three of us the silent treatment for an hour, while we walked around the amusement park with Dad moping.

If Dad took an embarrassing picture of Mom, she'd bide her time, and include Rory and me on the revenge scheme, or she'd just put her finger up her nose when Dad said, "Patty, smile!" 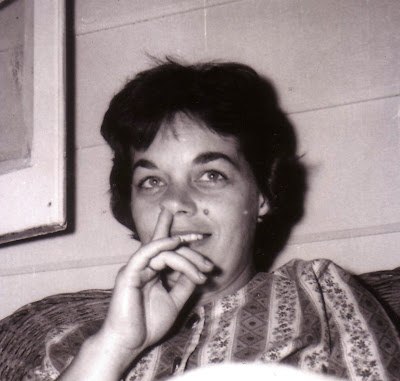 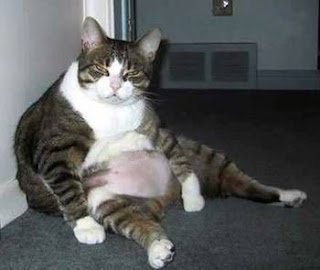 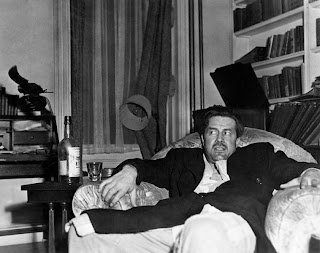 vanilla topping. I made 16 Blondie brownies disappear, the last five, hard as rocks nearly cracked my teeth. I imagined each Blondie was a small hero sandwich on extra crusty sugary bread, adding a little Hellman's mayo for realism. To balance my meals, I noshed on an assortment of nuts in a party basket the size of a catcher's mitt and three jumbo bags of lime flavored tortilla chips, my favorite.
.
My descent started January 10th at Lincoln's birthday celebration at my apartment. Unknown to me, three guests were cooks. Everyone generously baked sweets or raided bakeries. At the end of the night, the last detail left my house like that part in the circus when all the clowns keep coming out of the little, bitty car. Except this time in reverse. One of Lincoln's friends was driving home to Staten Island, and word flew round the room ~ "Ride." Seven or eight Staten Islanders jumped on the ride to avoid the multi-hour subway ferry trip. Two, forgot sweaters in their haste and no one took any food home.
.
This left me with my own personal bake shop, and me, the shop's only customer. I waste nothing. Finding a free newspaper triggers a parade. I was obligated to eat it all. Adding to my plight, the Giants lost to the Eagles the next day. My depression led to three straight golden cake dinners, I thought I was being good by having water instead of milk with the cake, but the way I figure, my meal was in the 2000 to 2500 calorie range.
.
Last night, I ate the last brownie, it took a while, my back teeth battled to bite through it. But it's done. In the last 12 days, I've eaten the equivalent of half a dozen Entenmann's Pineapple Crunch Cakes. My belly feels funny. I'm not going through withdrawal because I don't crave sweets, but when they're there...
at January 23, 2009 4 comments:

Sam & Me at the Inauguration 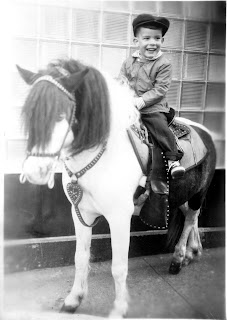 Feels terrific to be an American today.

Here I am, last Saturday, starting my trip to the
Inauguration in Washington D.C.

I began my journey on 84th Street and East End Avenue. The Italian guy who takes pictures of kids on the pony was going on vacation for two weeks and he liked the way Sam & me got along. Charlie asked me to take care of Sam while he was away in Lodi, New Jersey visiting relatives who just came over from Palermo. I said, no problem.

Our ride down Mason-Dixon way was smooth. We're staying at the Willard near the White House ~ Sam loves the oats there.
at January 20, 2009 No comments: 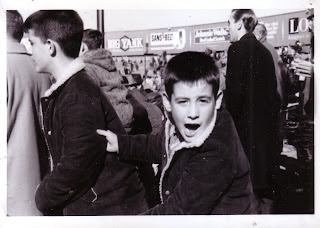 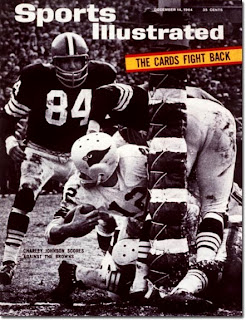 .
The Cards burned the Eagles.
.
Bye, Bye, Philly.
.
Kurt Warner, take the Cardinal mantle from good ol' Charley Johnson.
.
In 1966, the Giants had a fan club, and Rory and I were standing members. Membership included free admission to New York Giant Saturday football practices at Yankee Stadium before the seven home games. We dragged Dad up to the Stadium and sat in the bleachers. - (picture above ~ that's me, watching the action, & Rory, facing the camera) - the players came right up to you and occasionally an errant punt or a bad throw would end up in the 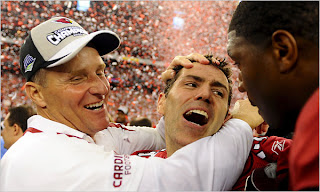 stands, and you got the opportunity to throw it back on the field. I died for that.
.
The friendliest Giant players were Gary Wood, Spider Lockhart and Ernie Koy. But my favorite player to talk to was Charley Johnson, #12, St. Louis Cardinals, QB. He'd come right out to the monuments and play catch with the fans. I knew he went to New Mexico State, and when I yelled "I Love New Mexico!" He threw the ball right at me, and I caught it. The "Duke" in my hands was huge, I threw it back off the laces near the bottom of the ball and threaded a decent spiral. Johnson smiled and gave me a thumbs up.
.
I could never root for Charley Johnson against the Giants, but I didn't want him to get hurt and I rooted for him crazy any time he played the Cowboys, Eagles or Redskins.
.
I hated Bobby McDonald when I was seven years old. Seeing the Cards beat the Eagles yesterday brought back fond memories of watching the Giants clip the Eagles at Franklin Field.
at January 19, 2009 No comments:

Michael Irvin Knew What Time It Was 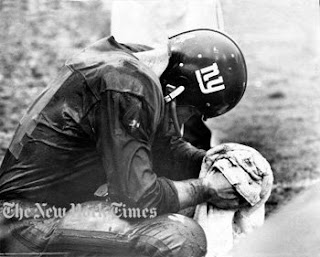 DALLAS -- Hall of Fame receiver Michael Irvin says he calmly chatted with a gunman in another vehicle after the armed passenger turned out to be a Dallas Cowboys fan.
Irvin, who was not harmed, says he was "very afraid."
A Dallas police report says Irvin was stopped at a red light Monday night in North Dallas when two men in a truck pulled up next to him.
The driver rolled down his window, so Irvin did the same, thinking the two men recognized the radio talk show host and television commentator.
The passenger flashed a gun. Then the retired NFL star heard one of them call out his name and mention being a "huge Cowboy fan."
"The passenger pulled out a semiautomatic and I knew what time it was," Irvin told The Dallas Morning News. "But he said, 'Oh, that's Michael Irvin, with the Dallas Cowboys.'"
Irvin says he began talking with the men about the team's disappointing 9-7 season and Dallas not making it to the Super Bowl.
"So we started talking about the Cowboys and everything," Irvin said in the Morning News. "Then they got back on the highway."
The pair eventually drove off.
"I tell you what, I'm glad he was a Cowboy fan," Irvin told the Morning News.
at January 14, 2009 No comments: 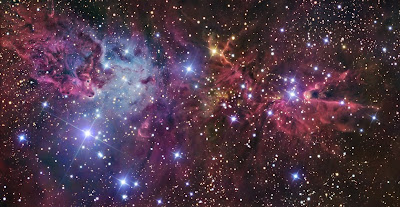 Give it to Jacobs! 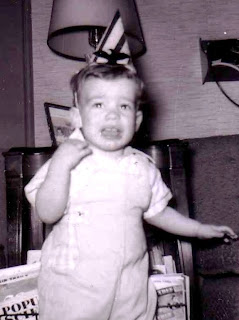 "Oh, no! Manning!"
.
Here I am, watching the Giants self destruct yesterday.
.
"Please, Eli, no more sneaks."
.
I don't handle big losses well. It took hours and a large piece of golden cake with chocolate icing from Cindy, my baby-sitter, to calm me down after the Giants turned the NFC crown over to the Eagles, or if I have my druthers, the Arizona Cardinals.
.
I always wear my birthday hat for big Giant games. Gets me in the mood. Philly played well, we were doo-doo and at least it wasn't the Cowboys.
at January 12, 2009 3 comments:

Merrill Black wrote a terrific piece in the Sunday Times City Section two weeks ago. It will take you five minutes to read, but it's spirit will touch you all day. Best investment return in town.


This week, the City Section posted my letter to the editor on this well written tale.

Are Looking at Me?

A long time ago, after a tough Giants overtime lost to the Rams in the playoffs, we headed for Sanibel Island to regroup. While walking down the beach, Alison and I passed a couple with Dallas Cowboy sweatshirts on. It was 90 degrees, so this meant they were unnecessarily showing their colors. Alison pointed her carrot at them and yelled, "You go down!"
at January 03, 2009 No comments: