The Love Seat (A Ghost Story) 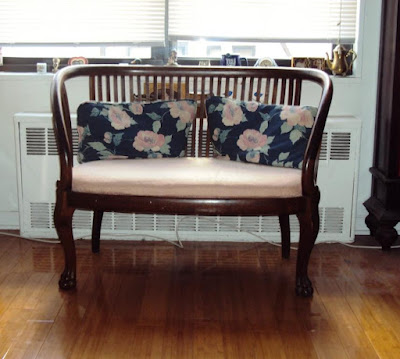 As a boy in the early 1960s, I’d go up my grandparents’ second floor apartment on York Avenue several times a week. Their hallway was lit by one low watt exposed bulb. The dark hall frightened me. Sometimes my fear was compounded when I’d hear fuzzy radio sounds coming from the usually locked basement. I assumed it was a foreign station, maybe German based on the marching music, waltzes and the announcer’s accent. I told my grandmother.

“You’re hearing things,” she said
“What’s down the basement? I asked.
“Nothing and it’s none of your business!”

I chose to believe her because I had no courage or interest in going down to the cellar to investigate. I began taking the single flight of stairs in four long jumps to get into the apartment as fast as I could. I never looked back.

Over the years, the radio echoes from the cellar were there on and off. In 1964, Pop Rode, the man I knew as my grandfather died (Pop was my grandmother’s second husband), and I began to stay over my grandmother’s on the weekend. The noisy avenue was right outside our front window. I’m a light sleeper. Awake, over my head I began to notice pacing in the apartment above. My ears perked up like Nipper the RCA dog. Dread sharpens my hearing. Through the airshaft next to my bed, I heard a man talking to himself. Based on my movie knowledge he sounded German. He spoke rapidly with quick pauses as if he was reading a list of pressing things to do. I didn’t move a muscle. The old lady above us spoke in a whisper, lived alone, and walked with a cane. It was a waste of time to check in with my no-nonsense grandmother.

“You’re hearing things.” She’d say. Eventually I’d fall back to sleep or it’d get light outside and chase my terror away.

In 1977, my parents bought a house after a lifetime of apartment living and had extra space to place new things. The day they moved in, I noticed Dad carrying a wide chair.

Dad told me a story. When his father contracted late stage tuberculosis in the mid 1930s, Mr. Volk, the German man upstairs cared for Dad’s family, bringing them food and fetching a doctor when one of them was sick. After my Dad’s father died in February 1941, Mr. Volk gave my grandmother a couple of dollars anytime she was short. As a thankful gesture, my grandmother invited Mr. Volk in for coffee at the kitchen table. While Dad spoke, I pictured this with ease because I saw my grandmother do the same thing hundreds of times in my lifetime. She was strict but kind.

Mid 1942, Mr. Volk knocked on my grandmother’s door. With his hat clutched in his hands, he greeted her urgently, “Mrs. Pryor, how are you? You work hard. I have something to ask, it is difficult. You know I’ve been good to your family. When you’re husband was ill and after he passed. I care for you and your sons like they’re my own. Immigration came yesterday and said I’m being deported in two weeks. There are problems with my papers. I have one chance to stay; I must be married and do it quickly. I ask you because I trust you to trust me that this is purely so I can stay. I’m desperate!”

My grandmother paused, took a deep breath and politely turned Mr. Volk down. He didn’t grow angry; he thanked my grandmother for her kindnesses and asked her a favor.

“Would you take care of my love seat until I return after the war? It belonged to my parents.” 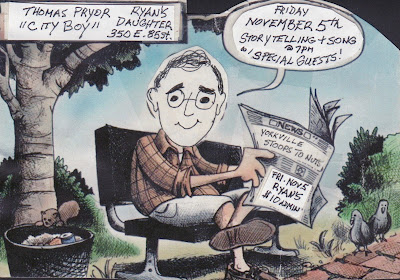