February 1941, on a Saturday morning, my father woke up and found his father drinking coffee alone in the kitchen with only the bare winter light coming in through the backyard window. My grandmother and uncle had left for work. Dad, 11, talked baseball with his Dad while eating three bowls of cereal. My 40 year old grandfather, ill with Potts Disease, a late stage Tuberculosis, told his son he needed to rest and suggested Dad go out and play. Dad got dressed took his mother’s scarf on his father’s suggestion, then he got a long hug and a wet kiss from his father and a good bye in his ear, twice.
After my father left, my grandfather pushed himself up from the table, grabbed a bunch of towels and stuck them under the door and the windows. He pulled a chair over to the oven, stuck his head in it and killed himself. My father found his father dead an hour later and ran and get a cop.
Today is Dad’s birthday, if he were here he’d be 93 and he’d still be expecting a call a day and a kiss on the lips, hello and goodbye. When I was young I didn’t understand his strong grip on Rory and my life. He was a suffocating son of a bitch but I guess he wanted to make sure we didn’t leave him.


Lucky for me, he was the most interesting pain in the ass I’ve ever known, and I miss him each day. His artistic and mechanical talent was boundless, barely owning an education (his early schooling were movies and the big bands at the Paramount) he read everything and could talk any subject intelligently. He knew every joke ever told, and told them well, over and over again.

Most of all he was a sailor, in his heart and in his soul. No conversation was ever far away from a reference to the sea, the Navy, the Merchant Marines, or his three trips around the world. Dad joined the Navy on his 17th birthday in 1946 after a failed attempt the previous year to get in before the war ended. After two years in the Navy he spent three more in the Merchant Marines.


If Dad didn’t meet Mom, he would have made a career at sea. He loved us dearly but never lost his yearning. My brother and I often heard, “if it wasn’t for you I’d be on the ocean.” He told me his father’s fondest wish was to be a sailor. Maybe in his heart that’s what my grandfather was. Being a sailor must have been a dreamy place to go to when he was a boy in the Staten Island orphanage, Mount Loretto at the end of Hyland Blvd. and later when the disease sent him upstate to Tuberculosis Sanatoriums for seven of his last ten years. Maybe my Dad wanted to finish his Dad’s dream. For five years, he got the chance 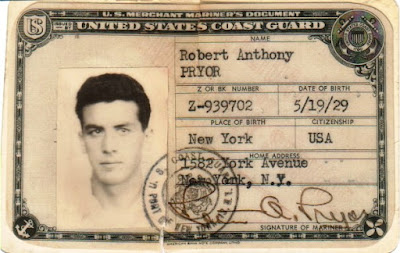