Walking to school the day Mom asked Dad for a house money raise, I smiled, remembering it was Good Friday. That afternoon we’d be doing the Stations of the Cross in the church. Right after lunch, I said, “Sister, can I be excused?” The nun made a face but she had to let me go down to the sacristy to transform into an altar boy. The rest of the class and the whole school assembled in the pews a half hour later. Kids ate the Stations of the Cross up. It was theatre. Two altar boys with gigantic candles would stand to the side of a third boy carrying Jesus on what to me looked like a heavy duty stickball bat with a crucifix on top. You felt like you were in the Roman Legion and you got to leave the altar and walk up and down the church aisles. “Look at me!” Standing right next to your chums and pretty older girls who couldn’t make you go away. That particular afternoon, things got interesting. 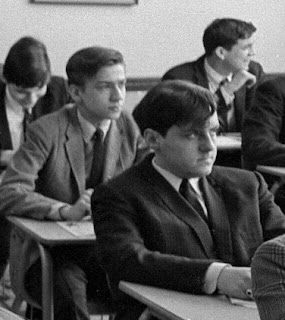 Kenny Devoe loved altar wine and for some reason would never drink it directly from the gallon jug. He carefully poured the wine into the cruet, the tiny glass vessel used during the mass. This drove me crazy. First problem was a twelve-year-old drinking wine. Did Kenny think he was going to get in more trouble or less trouble depending on his method for getting it into his stomach? The other problem was his slow wine transfer meant he was tripling the chance of getting caught. We knew if Kenny got busted our indictments were sealed. School rule - If you’re there, you did it. That day, Kenny drank too much. When the altar bells rang, we led the priest out of the sacristy to the center of the altar to start the procession. I had a candle, Smithy had the cross and Kenny the other candle. At the ninth station, when Jesus carrying the cross falls for the third time, the entire student body cheered him on with practiced sarcasm learned from first grade through eighth grade; they read from their missals, “Jesus – exhausted – in pain – for the third and final time. Long pause here BUT, NO! Jesus rose and struggled on!” Three hundred little boxing announcers sounding like Don Dunphy at ringside screamed, ‘our Lord had risen from the canvas back into the heat of the battle.’ The nuns flew around the church wanting to thump somebody but really couldn’t do anything, while the getting-away-with-murder insolent children picked up the reading speed leading towards an early dismissal. The nuns tried to slow it down but the three hundred-voice rock was rolling downhill. After a good giggle, I looked around the church for some of my friends, when I noticed Kenny nodding off into the flame at the top of his candle. I nudged Smith carrying the pole, who nudged Kenny, but Kenny was well past that point. He was a sleeping horse standing up in his stall. After a hard nudge, Kenny’s head lifted up with a jolt, he shook his noggin and wiggled his nose. Then he gradually dropped back into the flame. We pulled Kenny along through the rest of the stations. By the end, his nose smelt like skirt steak. Kenny left the altar boys that week. His nose, first purple, and then red for a year became Kenny Devoe’s Magical Nose. 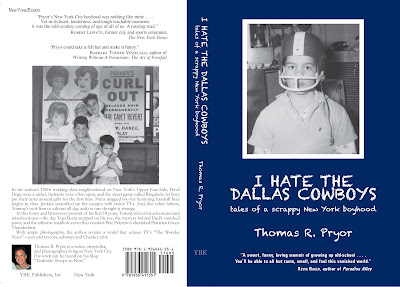 If you like my work check out my memoir, "I Hate the Dallas Cowboys - tales of a scrappy New York boyhood." Available at Logos Book Store or online at Amazon or Barnes & Noble.
The book has 136 Amazon five star reviews out of 136 total reviews posted.  My old world echoes TV's "The Wonder Years" ~ just add taverns, subways and Checker cabs.
at April 15, 2022