The Boys Second Home in Yorkville @1945 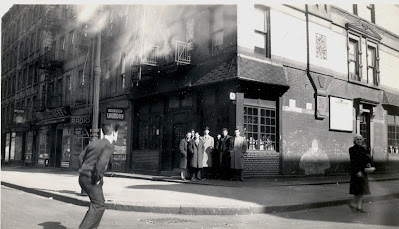 Here are photos of Gene's Tavern on the northeast corner of 84th Street and York Avenue taken in 1945. On the 84th Street wall, right above the lady with white hair crossing the street is a service memorial with the names of the Yorkville men and women who gave their lives in World War II. Look at the stores on both sides of the avenue, the barber pole and the young guys on the bike and sitting on the bumper of the car on York. And the graffiti on the wall to the left of the service memorial in the photo above and in my Dad's sketch below reads, "Cameron."
Dad earned a smack from his mother when she saw the graffiti and recognized Dad’s art work. If she knew it, others knew it, and the one thing she never tolerated was being embarrassed by anyone related to her by blood, marriage or politics. She gave me a smack for my 83rd Street "Teddy Ryan" graffiti 25 years later in 1969.

Gene's Tavern had a two lane bowling alley in the cellar. My father's brother, Tom, was the weekend pin boy for the place. Good tips. When Tom got too old for the job he passed it onto his younger brother, Bob, my Dad. There was a controversy over the changing of the guard on this pin boy position in 1941. They were 16 and 12 at the time, their father had just died that year, their mom worked two jobs, six days a week. Tom and Bob liked to settle things quickly. I'm saving that one for a longer story called, "Pin Boys." 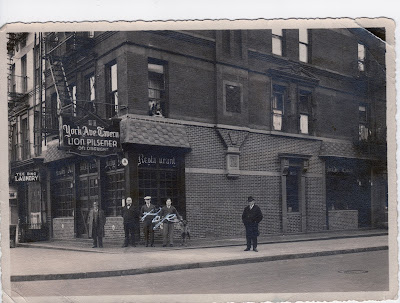 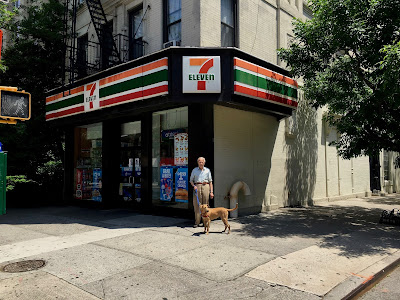 If you enjoy my stories please  check out my memoir, "I Hate the Dallas Cowboys - tales of a scrappy New York boyhood." Available at Logos Book Store or online at Amazon or Barnes and Noble.
The book has 133 Amazon five star reviews out of 133 total reviews posted. We're pitching a perfect game. My old world echoes TV's "The Wonder Years" ~ just add taverns, subways and Checker cabs. You can also purchase my photography portfolio, "River to River - New York Scenes From a Bicycle" on Amazon.