February, mid-winter blues remind me of a 1950s and early 1960s "Yorkville man thing" they did as an excuse to getaway with the guys for the weekend. A few years ago, Mr. Beller's Neighborhood published my story on the subject.

Dad used to hunt. He didn't golf, so hunting was another made up reason to get out of the house. He never struck me as the hunting type, but once or twice a year, he'd be off upstate for a long weekend. It was a Yorkville man thing in the 1950s and 1960s.

As he was walking out the door in his Elmer Fudd hat with his rifle, Mom told him," If you shoot something, I want you to think about Bambi's mother lying in the woods bleeding to death, and she's thinking about her poor baby left with that heartless bastard father."

Dad's face did tricks when Mom said that. I never seen such complicated movement from Dad's mouth, eyes, cheeks, and eyebrows. He looked heartbroken, sad, angry, confused and through it all still came back to the look, like he wanted to kill Mom.

Well, one time he gets home from hunting, and he ain't talking. I give him a good look over, and I can see he's not playing mum because he's hungover, something's on his mind. He sits in his chair, and Mom starts pressing him.

"What the hell's a matter with you?"

And that was that. While Mom and Dad were talking, I began to think about Thumper. Dad loved Thumper, he drew him and Bambi for Rory & me all the time. Dad shot Thumper. I had nothing to to say.

The next day it snowed heavy, I asked, "Dad, since you're not going to hunt anymore can I use your pigskin gloves?"

Dad gave me one of his "you're out of your mind" looks, he loved those yellow gloves, had them since 1952, then, he thought it over and said, "OK."

I flew over to Central Park with Rory and the McNamara brothers. We worked the hill on 79th Street until we were soaked to the bone. When the chills got us, we dragged our sleighs back home. Mom wouldn't let us in the house until we took off everything but our drawers in the hallway. I was hoping to go back up to the park that night, so I needed to get everything dried quick. I wrapped my dungarees and long johns around the steam pole and put my socks, sweatshirt and dad's pigskin gloves on the radiator. An hour later, I went to check on everything. My dungarees and long johns were almost dried, then, I went to the radiator. The socks were fine, but Dad's gloves looked like shrunken voodoo heads. The fingers were blackened and curled up like they wanted to take a nap, for forever. They were half their normal size. Resembled beef jerky.

Before I could say I lost them, Dad came in the house and saw me looking them over. I tried to palm them down my underwear. They were too hot. He walked up to me and took one of the gloves out of my hand. Dad didn't hit, but sometimes I wished he did, rather than deal with his leaning in, verbal assaults. I could see he was about to rip into me and I rushed to say, "Dad I'm really sorry, I didn't mean it, and you're not going hunting anymore, right?"

His face switched over, he was thinking about the bunny. He held the glove up, looked at it once, gave it back to me, and walked away. 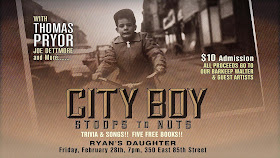 
"City Boy: Stoops to Nuts" Thomas Pryor's stories & songs about Yorkville's rich character and neighborhood history. Fri Feb 28, 2020 @ 7pm to 10pm Ryan's Daughter 350 E. 85th Street Admission $10 Thomas Pryor Bio My family landed on York Avenue in 1896 at 1403 right off 75th Street. My show takes you through one hundred and twenty-four years of our neighborhood character and history through the voices of my family, friends and neighbors that called Yorkville home. Thomas Pryor's work has appeared in The New York Times, Pittsburgh Post-Gazette, and other periodicals. His memoir, “I Hate the Dallas Cowboys - tales of a scrappy New York boyhood,” was published in 2014 (YBK). It has 133 five star Amazon reviews. Pryor’s blog: "Yorkville: Stoops to Nuts," was chosen by The NY Times for their Blog Roll in 2008. Thomas appeared on PBS's "Baseball: A NY Love Story," NBC’s "New York Nonstop,” “This American Life,” & “Impractical Jokers.” His newspaper column ran in Our Town & The West Side Spirit. For five years, Thomas curated “City Stories: Stoops to Nuts,” at Cornelia Street Cafe that Time Out, The NY Daily News and CBS News praised. His photography portfolio, "River to River - New York Scenes From a Bicycle," was published in 2012 (YBK). Pryor's passion is preserving the history of Yorkville through storytelling, writing and photography. His play about the neighborhood, “City Boy,” is coming back.
07:00 PM - 11:00 PM
Thomas Pryor at 5:49 PM