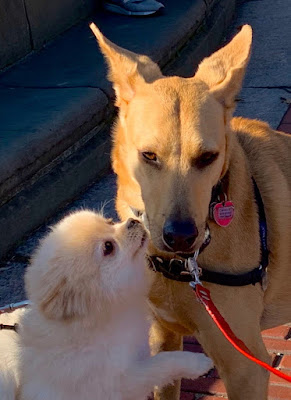 We hunting duck in Central Park. No go. But we found a sailboat race and afterwards Charlie met Mr. Picklepants at the fountain. No first name given. But plenty of kisses. 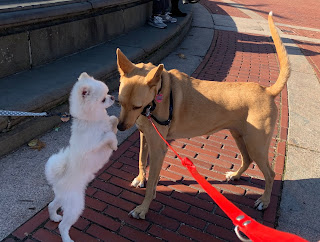 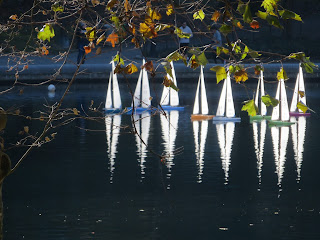 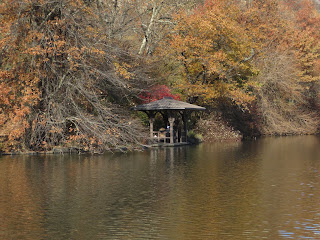 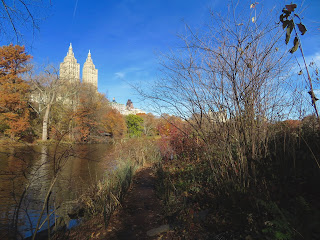 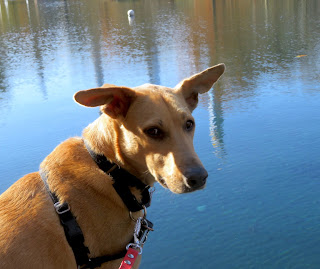 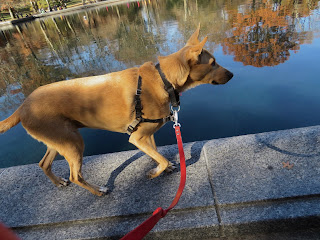 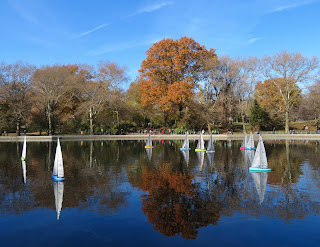 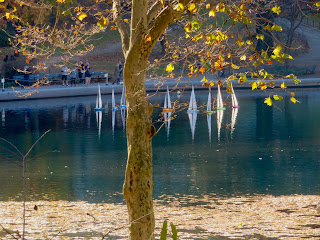 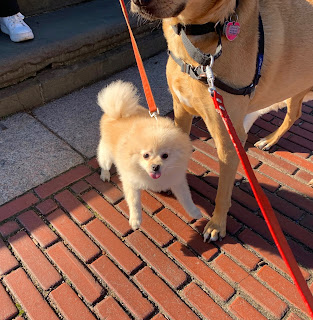 Here is a link to an album with lot more photos.
Posted by Thomas Pryor at 3:03 PM No comments: 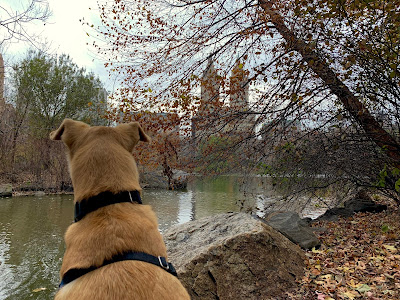 
No luck. But she had generous opportunity to check out potential targets down the road. 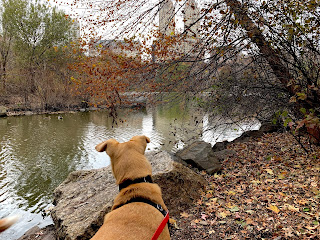 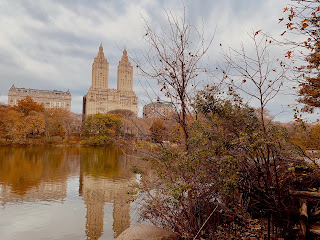 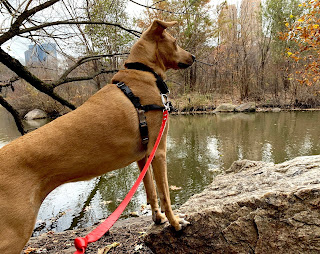 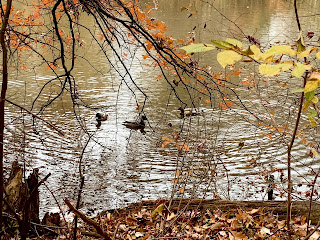 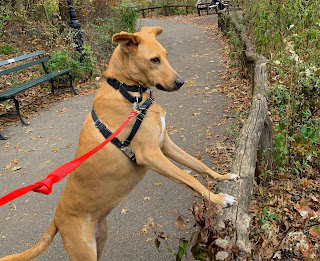 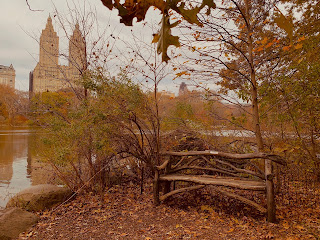 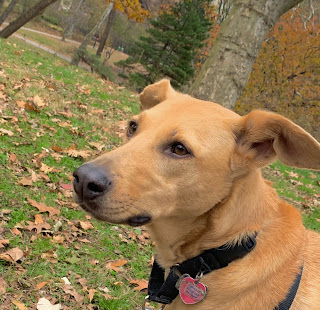 Do you like old New York City photos and street life stories? Then check out my 1960s memoir,"I Hate the Dallas Cowboys - tales of a scrappy New York boyhood."

Available at Logos Book Store and online. The book has 132 Amazon five star reviews out of 132 total reviews posted. Pitching a perfect game! 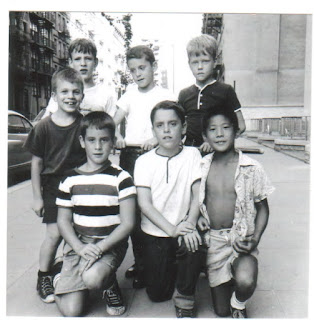 Do you like old New York City photos and street life stories? Then check out my 1960s memoir,"I Hate the Dallas Cowboys - tales of a scrappy New York boyhood."

On October 4, 1965, the feast day of Saint Francis of Assisi, Saint Stephen of Hungary's student body marched up to Third Avenue to wave to Pope Paul VI driving by on his way to Yankee Stadium in his limousine. This was important to me on a few levels:
We were getting out of sixth grade early. 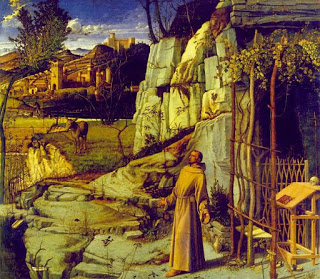 The New York Yankees stunk in 1965 and having the Pope say a Mass on their home field should help the team.
I'd have free rein to look at all the older girls in the school, and they couldn't do anything about it.
"What are you looking at?"
'Ha, ha,' I'd think, not say.
The Franciscan priests in our parish were good guys and the nuns and the students got into the spirit of the day each year, whether the Pope showed up or not. Plus, I loved the guy. St. Francis was cool. I loved animals and he blessed them. Unlike Doctor Doolittle, St. Francis could really talk to them. And, St. Francis was in my grandmother's holy trinity along with St. Anthony for lost objects and super duper St. Jude for hopeless cases ~ a biggie for our family. 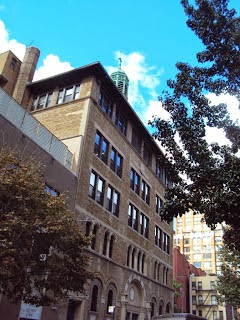 Every two years, the school ran a movie of the Life of St. Francis in the auditorium getting us out of a class for a Friday afternoon. The movie wasn't bad, and I admired the comfort of only wearing a robe with a rope belt, best uniform every invented, and Italy was beautiful and I considered it a place I definitely would visit down the road. After lunch, we lined up outside the school and like a gaggle of 300 geese we waddled up 82nd Street to the avenue, where we stood against police saw horses on the east side of Third between 81st and 82nd Street.

Earlier that morning, I served eight o'clock mass with a guy in my class, Michael Toth, who was a big pain in my ass. One of those guys that always had to be first in everything: out the door, on line for the water fountain, first at bat in punch ball. Toth located a Siamese pipe connection right behind us against a building, and used it to sit on, its shape perfect for a kid's bottom. We waited a long time, and Toth also planned on standing on it when the Pope went by for a better view. Toth kept coming over and telling everyone how comfortable it was and how he was going to have a perfect view, and if anyone tried to sit there he'd run over and throw them off. We all wanted him dead.
While he's doing this, I'm eating a Devil Dog the long way, taking the two cake parts apart and starting to lick the crème out of the middle, when Toth comes over to tell Freddy Muller, "Ha. Ha, I've got a great seat," While he's yapping to Freddy, I slip one half of my half licked Devil Dog onto the Siamese connection, crème side up. Toth satisfied with himself, sits on it and he's so caught up he doesn't notice, the nun, sick of Toth popping up and down moves over to straighten him out, Toth pops up again on his way over to brag some more. The nun notices the Devil Dog sticking to his pants and smacks Toth in the head thinking he's an idiot. After she hits him she says, "Wipe yourself off, wood head."

Toth puzzled about everything, reaches behind and grabs most of the cake, and I could tell by the look on his face he was praying it wasn't dog crap. Meantime, the Pope's a half block north of us. I missed him, Toth missed him, and the nun hit Toth again because she missed him, too.

Above us from a window, I heard the We Five singing on the radio,

"When I woke up this morning, you were on my mind."

I returned my focus to the older girls. 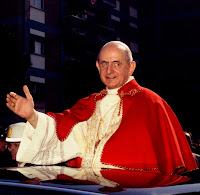 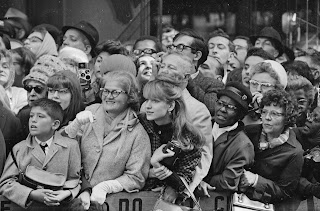 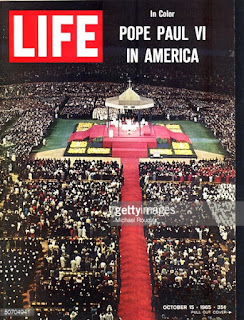 Praise for the book:

“Thomas R. Pryor has written a sweet, funny, loving memoir of growing up old-school in a colorful New York neighborhood. A story of sports, family, and boyhood, you’ll be able to all but taste, smell, and feel this vanished world.”
Kevin Baker, author of the novels “Dreamland,” Paradise Alley,” and “Strivers Row,” as well as other works of fiction and nonfiction


“Tommy Pryor’s New York City boyhood was nothing like mine, a few miles and a borough away, and yet in its heart, tenderness, and tough teachable moments around Dad and ball, it was the mid-century coming of age of all of us. A rousing read.”
Robert Lipsyte, former city and sports columnist, The New York Times

“Pryor could take a felt hat and make it funny.”
Barbara Turner-Vesselago, author of “Writing Without A Parachute: The Art of Freefall”


“Pryor burrows into the terrain of his childhood with a longing and obsessiveness so powerful it feels like you are reading a memoir about his first great love.”
Thomas Beller, author of “J.D. Salinger: The Escape Artist” 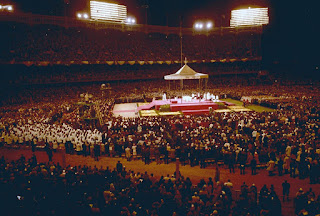 The Jean Shepherd of Yorkville has a book - you should get! -Adam Wade, winner of 20 SLAMS at The Moth (18 StorySLAM victories and 2 GrandSLAM Championships)
I've been a HUGE fan of Thomas Pryor's stories for a long time. It's so great to read so many of them in this fantastic book. Pryor pours his heart and soul into each and everyone of them. Some gut wrenching, others laugh out loud funny. And you don't have to be a NY Giants fan or a Cowboys hater to enjoy this book (though that will help). You just have to have a heart and love fun, authentic stories. Buy this book, I promise you'll enjoy it!
Dave Hill "The Goddamn Dave Hill Show" ~ WFMU radio
I wasn't alive for the New York Thomas Pryor writes about, but thanks to his brilliant, honest, and hilarious book, I feel like I was there."

Great writers are supposed to transport you to their world -Nicole Ferraro, writer, N.Y Times & Editor-in-Chief, Webby Awards
Thomas Pryor is one of those unique writers who can grab your heart and make you laugh and cry in a single sentence. The portrait he paints of growing up in New York City -- in Yorkville, specifically -- in the 60s is so vivid that you'll feel yourself there with him in every single scene, and every single memory. Great writers are supposed to transport you to their world, and Thomas Pryor does this exceptionally well. You'll walk away from this book feeling like you know intimately every butcher and bartender in town, every Sister at St. Stephens, and certainly every member of Thomas's family. Even more than that, though, this is a book about being a kid, growing up, loving people and losing them, losing people and loving them even more, and finding one's way. Basically, it's a book for anyone who's ever experienced the sheer pleasure and pain of being alive and growing up. Buy it today. It will leave you feeling enriched, touched, entertained, and eager to turn to page one all over again.


Wonderful Storytelling with a Time Machine Effect! - Leslie Gosko, entertainer, storyteller, comedian, "Funniest Woman in NYC"
Heart-warming, hilarious, and wonderfully quirky, "I Hate the Dallas Cowboys" has something for everyone. Thomas Pryor does a fantastic job of transporting you to 1960's New York where you feel like one of the characters in his Yorkville neighborhood. Stylistically reminiscent of Jean Shepherd's "A Christmas Story," this book, too, becomes an instant classic!


David Terhune - The Losers Lounge, co-founder
After reading "I Hate The Dallas Cowboys", I felt as if I had grown up with author Thomas Pryor. His stories of a childhood in New York City, punctuated by family photographs, drew me into his world and took me on a personal tour of the streets and neighborhoods of his youth. Living there were a host of vivid and eccentric characters - his parents, brother Rory, grandmother Nan, Joe from the candy store, Sister Mercedes, stewardesses Marie and Justine, and his many friends and co-conspirators with whom he shared his adventures and dreams. Mr. Pryor’s humor is gentle and infectious, his memories animated and engrossing. These essays are both historically valuable as well as entertaining in a way that befits the unique voice of New York City. 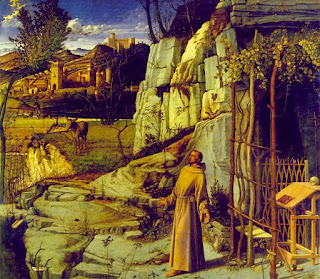 Posted by Thomas Pryor at 1:20 PM No comments: