I Don't Advise This Diet

"I've run out of things to put Hellman's on."

Disgusting with a weight gain related to a two month back problem and my weakness for crap, I'm not shopping until I eat my way through my pantry and freezer. This requires rarely available creative thought.

I started with my last bonafide treat, one sliced knockwurst on my last Eggo waffle with the skimmed mayo off the side of my last jar of Hellman's.

Thursday, spooned a half jar of Rao Mariana sauce with fluffed couscous.

Friday, frozen Broccoli florets with a handful of dry roasted nuts from a Mr. Peanut's jar.

Last night, olives, bread and butter pickle chips and a can of Progresso split pea soup.

Tonight, Eureka! I found a slice of American cheese in a plastic coat under the lettuce I was saving for a rainy day. I put bacon bits on the slice and a drizzle of Russian dressing and made believe it was on a Thomas's English Muffin.

Dessert was frozen string beans with . 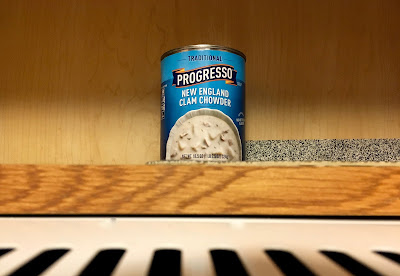 Posted by Thomas Pryor at 7:46 PM No comments: 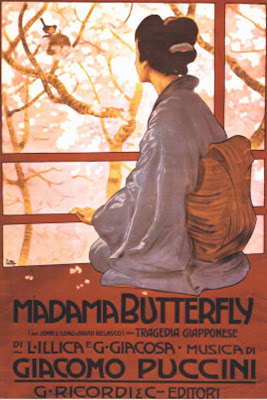 
Last Saturday night, I had smelly cheese, cashews, black bean dip, spooned Hellmann’s and three Coronas for dinner. I over-bought crap for company, it’s causing me stomach problems, but I have to finish the stuff.
Sunday morning, I met a writing editor on Cathedral Parkway who took too much money to tell me too little about my work. I left her apartment feeling down.
Driving east, I saw a woman trip in the middle of Manhattan Avenue. She hit her head. I parked along side her forcing traffic around the scene. Her face was pressed to the asphalt. It was hard to see how injured she was. Someone called an ambulance. After a few minutes, she turned her head towards me. She was bleeding from two cuts, one on her nose and one on her lip, but otherwise looked OK. Her name was Grace, an Asian lady in her sixties, curly gray hair and weak English. I knew her name because the guy helping me help her was her neighbor in the tall building across the street. Once Grace got her bearings, me and the other fellow walked Grace into her lobby. After she sat down, she tried to force an envelope into my hands.
“Take this, take this.”
“I don’t want it.”
“Take this, take this.”
The other guy said take it, so I took it. On the sidewalk, I opened it and found a single ticket for Madame Butterfly at Lincoln Center, Row A in the Second Ring. Performance started at one thirty. It was twelve thirty five.
My life-long opera experience was limited to Alfalfa’s Barber of Seville, Elmer Fudd’s Siegfried & Bugs Bunny’s Brunhilde. Despite this handicap, my interest was high because the “Un bel di, vedremo” aria was my Mom’s favorite music. Coming home from school, if I heard this sorrowful melody coming through my front door, I knew Mom was having a special afternoon. She’d have a look on her face that nothing else ever put there.
I parked the car on East 82nd Street, dropped my stuff off and hailed a cab at one o’clock. The Greek parade cut off cross-town traffic through Central Park. We ended up going down to 53rd Street, to go west, and back up Eighth to get to Broadway and 63rd Street. I made it on the button.

Walking through Lincoln Center’s plaza, I felt a breeze on my crotch through the hole in my dungarees. I remembered Mom pulling me back into our Yorkville apartment when I tried to sneak out of the house in a torn shirt. She’d be so proud.

Entering the theatre’s second ring, sitting in my first row seat at the end of the aisle, I floated back to the late ’60s when I regularly scored a single ticket for a New York Giant football game at old Yankee Stadium. Being at the opera was strange and familiar at the same time.

Despite my best efforts, Act One had me on the ropes – the dark space, the sweet music and a comfy chair conspired. I couldn’t stay awake. I was having these mini-dreams involving Sigourney Weaver, loose clothing and me. I didn’t want to stay awake. I only needed to hear Mom’s aria in the second act. Unfortunately, the lady next to me was an arm-rest hog. She was eating and swigging soda with a friend, and felt that half my air space was sovereign for her meat hook. Every time Sigourney went to lick my ear, my neighbor’s elbow took my arm out from under itself, like a judo leg swing.


At one point, my glasses flew off when my chin bounced off the wood arm-rest. In the distance, I heard B.F. Pinkerton romancing Cio Cio San in Italian, my ancestors’ tongue. I didn’t understand a word. Recovering my specs, I plotted revenge.

Gathering all the gas in my intestinal tract, I secured it in a single room right above my exit passage. I held it still. Saturday night’s meal was the perfect storm. I built pressure and blocked it. When I fatigued my sphincter muscle, I lifted my right cheek and let her blow. The strength of the release lifted the rest of my ass off my seat. Using my arms, I arched right to ensure my aim was true. The cloud sucked the oxygen out of the air. When the wind died down, I got a quick look at the woman’s face, her bushy eyebrows were waving and she was barely conscious, then I ran out to the lobby.

After the intermission, my neighbor switch seats with her friend. I had no further arm-rest issue. The cold air during the break woke me up and I was all there, listening to the beautiful soprano sing “Un bel di, vedremo” gorgeously. I cried, thought of Mom, it felt good.

During the second intermission, I scouted one of the information tables in the lobby. There was a brochure for a free Big Band concert the following week. An attractive volunteer leaned into me.

“You’re kind of young to be into it.”

“I have all my Dad’s reel to reel tapes, Dorseys, Miller, James, Shaw and many more. We fought over music, but ended up liking a lot of the same stuff.”

“Oh, that’s wonderful. My late husband loved the Big Bands. I have 150 albums that he played all the time.” She said.

“I don’t listen anymore, I have most of the stuff on CD and that’s fine for me.”

“Give them to your kids.”

“They don’t listen and don’t want them. Would you like them?”

“That’d be great, but please think about it before giving them away.”

“No, no, I’ve thought about it, and they’re clutter to me. I’d feel much better if someone was enjoying them.” Edith smiled.

She and I exchanged personal information and kept talking until the chimes went off signaling the start of the third act.

I’m picking up the records next week.

Check out my 1960s memoir, "I Hate the Dallas Cowboys - tales of a scrappy New York boyhood." at Logos Book Store, or purchase the book online at Amazon (127 five-star reviews out of 127 posted) or Barnes & Noble ~ and buy "River to River ~ New York Scenes From a Bicycle" my photography portfolio online.

Posted by Thomas Pryor at 11:42 AM No comments: 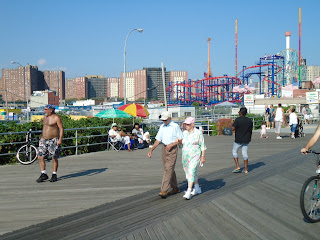 Strolling Coney Island with your best girl.
"So Much In Love" 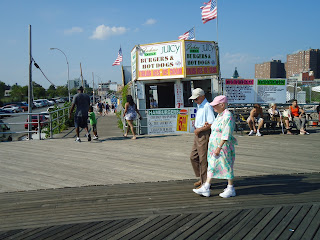 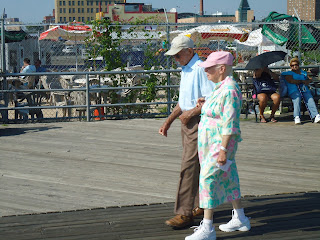 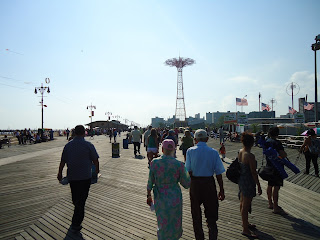 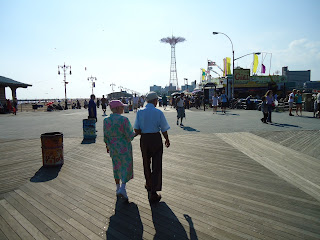 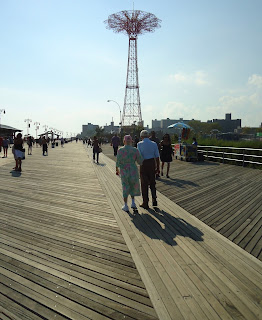 Posted by Thomas Pryor at 7:38 PM No comments: 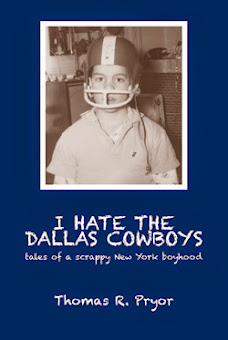